Weibo: The Drop And The Backdrop

Weibo (WB) fell hard after the Q1 2019 earnings were released before the market opened on Thursday, May 23, ending the day down 11.28%. In this article, I will shed a light on the earnings and the guidance that caused the stock to drop to a 125-week low, going back all the way to January 9, 2017. 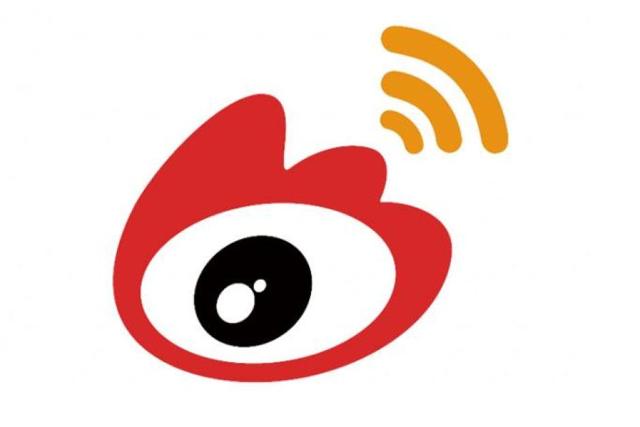 Weibo's results were actually good. In the first quarter, the Chinese Twitter (TWTR) grew its revenue by 14% YoY, to $399M. A lot of investors were very disappointed with this result, though. Didn't the management guide for revenue growth of 20.5% to 23.5% in the last quarter? How can this be comparable with 14%?

What a lot of people may overlook is that last part that the management added back then: 'on a constant currency basis'. And indeed, if you take the revenue in RMB, in which Weibo earns its money, the revenue was up 21%, within the range the company had guided for. The $399M revenue actually came almost at the midpoint of the $395 million and $405M the company had projected.

If you just look at the dollar amount, you see a huge revenue slowdown, the slowest revenue growth since Weibo went public. But with 21% growth in RMB, the picture actually looks a lot better.

As for the profits, earnings came in at $0.56, beating expectations by $0.04 and rising 12% YoY, which, I think (since the management didn't shed light on this), would translate to 18% on a constant currency basis. Not bad either, not at all.

I really liked the earnings, and again, Weibo was able to beat the estimates, as it has done in all quarters since it became a publicly traded company in the US: 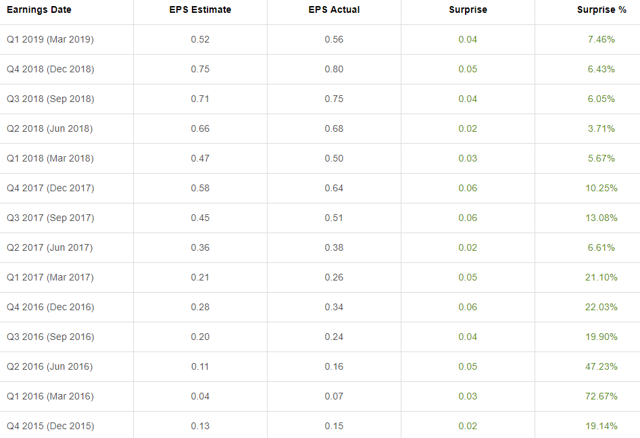 Of course, for any social network, the number of users is also very important. Weibo reached 465 million MAUs (monthly average users), up 13% YoY. It was able to add 54 million users over the last year. Here too we see good results for a company starting from such a high number of users already.

The DAUs (daily average users) reached 203 million, up 10% YoY and quite impressive in my book. The big majority of these users, 94% of MAUs, came from mobile.

Growing MAUs by 13% and DAUs by 10% YoY is very respectable for a platform that already has so many users. So, just as the earnings, the growth in users is not the reason for the big drop either.

The real problem and the reason why the stock tanked was the guidance that was given. Weibo expects revenue growth of about 7% for Q2 2019. That sounds bad for a company that has made investors accustomed to growth of 20% and more.

But here again, you should look at the context. This is what Fei Cao, VP Finance, had to say about the guidance on the Q1 2019 earnings call:

"Now let me turn to our financial outlook. We anticipate our second quarter of 2019 revenues to be in the range of $427 million and $437 million, or an increase of 7% to 20% year-over-year on a constant currency basis. This assumes currency rate of RMB6.9 to US$1."

While 7% seems really pedestrian for a company like Weibo, that 7% is actually the bottom of the range and the main reason is currency risk. Not something to be happy about, but understandable in the context, in my opinion.

As a lot of investors will know, there was a gaming licensing freeze last year, from Q2 to December 2018. Weibo had negative consequences of that temporary ban on licensing new games in China. That is one of the reasons that Weibo had difficult comps. Gaming customers were still a significant contribution in the Q1 2018 numbers. This is the Q1 2019 earnings call comment that gave more color to the prospects for gaming revenue:

"However, we believe that in the second-half, our gaming revenue will be returned to the first two meaningful percentage of first-half 2018. So that still – will still take a little bit more time to get there."

In other words: we will get back to where we were, but it will take a bit of time.

The management of Weibo didn't hide behind this fact and warned that there was more to the picture. Again, Goafei Wang, Weibo's CEO, on the Q1 2019 earnings call:

"For us, we saw sluggish ad growth from some of our top SME customers since the latter part of 2018, particularly in those industries hit hard by macro and the regulation factors. On top of that, pricing pressure across the industry caused by the oversupply of inventory in the market, the growth of our SME business was short of expectations."

This short paragraph contains a lot of information. SME (small and medium enterprises) customers spend less on Weibo since the end of 2018. There are several reasons. One reason that is mentioned is regulation. This is, of course, a reference to the gaming licensing freeze.

The macroeconomic circumstances are well-known too: the trade tensions between China and the US have their impact on SMEs. Not that results are always impacted, but an uncertain trade environment always makes companies and especially SMEs more conservative. More money is held back to have a war chest for if there really would come a full-blown recession.

On top of that, there is a pricing war at the moment in the ad industry. We have seen the same thing with iQIYI (IQ) on its earnings call and even Baidu (BIDU), which has problems in its ad business as well. Compared to those two, I think the results of Weibo are actually quite good. Tencent (OTCPK:TCEHY) grew its ad income by 25%, but that company is only starting to roll out its advertising strategy. WeChat has 1.1 billion users and QQ 700 million, so Tencent really is in another league and in another situation because advertising is only becoming more important now but was not that substantial before.

Over the longer term, Weibo should recover from this low. The macroeconomic circumstances and the gaming regulations had an impact on the company, but it is still able to grow by 21% YoY on a constant currency basis. The lower rates of the yuan versus the dollar impact the dollar results, but growth has not vanished.

With a TTM P/E of 17.8, Weibo is quite cheap for a company that is expected to grow for years to come. The forward P/E is even lower at 12.5 (according to finviz.com), but I think the expectations might come down and the forward P/E might be closer to 15 or so. Still, this is a reasonably priced stock. The sentiment versus Chinese stocks in general and especially those in the competitive advertising business is really bearish and, as we all know, this might go on for quite some time. But in the end, fundamentals will prevail.

The quarter that Weibo has printed was not outstanding, but relative to its peers, the company has actually done very well. The macroeconomic circumstances and the gaming licensing freeze have had their consequences for Weibo. The pricing war between advertisers on top of that make the place as a whole a hard environment. Despite this, Weibo was able to grow its revenue by 21% on a same-currency basis and is expected to continue to do that. But if you translate the guidance into dollars, 7% doesn't look exciting. It is forgotten that the range was set very wide: from 7% to 20%, depending on the currency rates.

The fact that Weibo has done better than iQIYI and Baidu on advertising tells me that its management is doing a good job and that it deserves credit. Once the gaming revenue comes back to its prior levels in the second half of the year, I expect Weibo's stock price to rise again too. Until then investors will have to wait for their shares to go up, unless there would be a trade agreement soon. With a weak yuan now and easier comps, the picture for 2020 looks good to me.

If you liked this article and you want to follow my updates on Weibo or other attractive growth stocks, please hit the follow button next to my name.

In the meantime, keep growing!

Disclosure: I am/we are long WB, TWTR. I wrote this article myself, and it expresses my own opinions. I am not receiving compensation for it (other than from Seeking Alpha). I have no business relationship with any company whose stock is mentioned in this article. 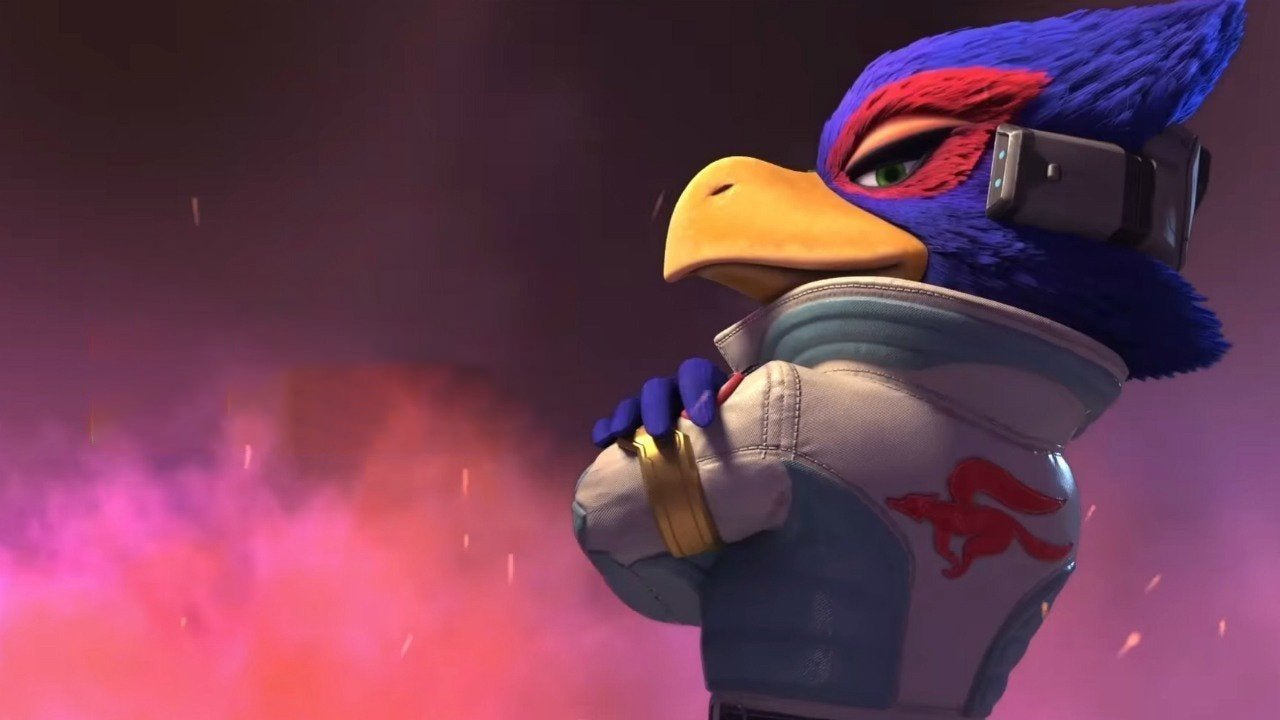 While the iPhone undoubtedly helped transfor...

After years of intense debate, the World Heal... Perhaps feeling the heat from impressive ...

The wife of President Donald Trump received b...