One of the biggest features in Android Q (or Android 10) is its system-wide dark theme. Everything from notifications to the settings menu has been given a dark overhaul, but apps are also going to be a huge part of that as well. The majority of Google apps support this system-wide toggle, but few third-party developers have followed the company’s lead. Here are some non-Google apps that support Android 10’s dark mode toggle.

In a recent update to the official Reddit app for Android, support for the Android 10 dark theme was added. This setting changes between the default “Alien Blue” color and the typical “Night” mode based on the system toggle.

However, you’ll need to ensure that auto night mode is set to “Follow system.” If you manually set the app to night mode, it won’t follow the system toggle, but the other themes including “Mint,” “Pony,” and “Trees” all will.

Here’s every Google app with a dark mode, and how to enable it

While Google’s Files app is one of our personal favorites for a file explorer on Android, Solid Explorer is a good third-party choice. It works well with Android 10, supports more advanced features like an FTP Server, and also works with the system-wide dark theme toggle. The change is immediate and works across the entire app. In the settings menu for Solid Explorer you can disable the auto-switching, though, by setting a theme without the “Auto” functionality.

I’m a LastPass user personally, but 1Password is pretty great about supporting new features in Android. As previously detailed, switching the dark theme toggle in Android 10 will also affect the entire UI of 1Password, even on the startup screen. 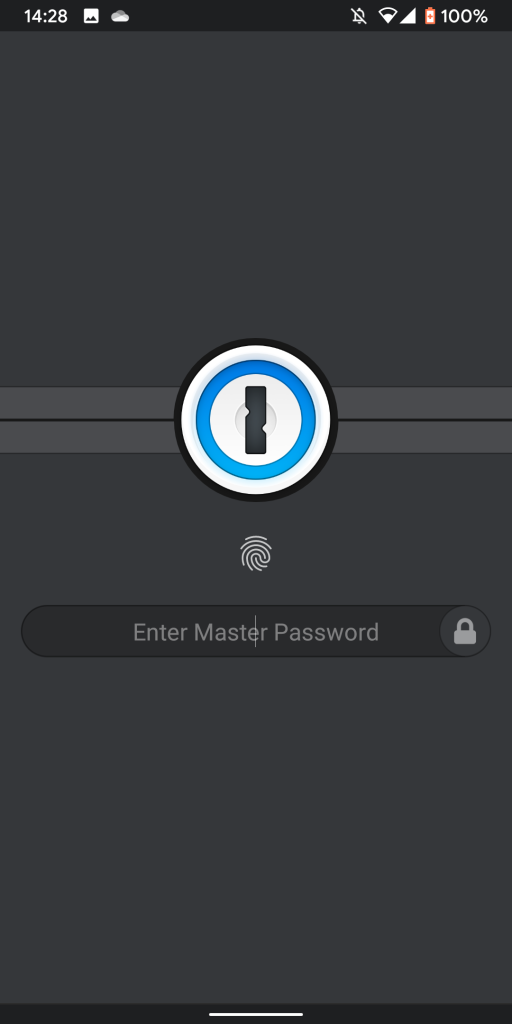 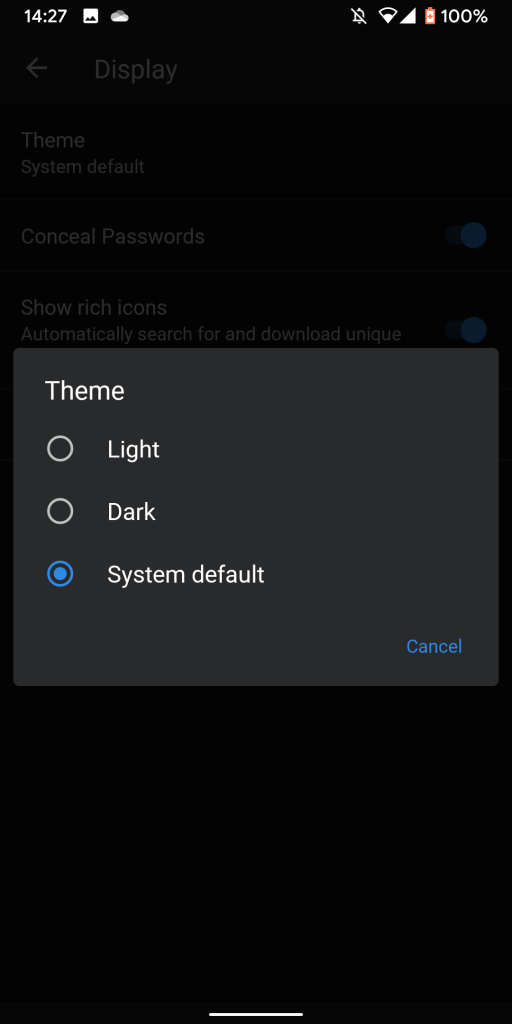 For an app developed by Android’s biggest competitor, Apple Music is pretty good about supporting new features. It recently added Chromecast support in its beta track alongside a test for dark mode support. The functionality has yet to arrive in a stable release, but the beta version of Apple Music does support the system-wide toggle. 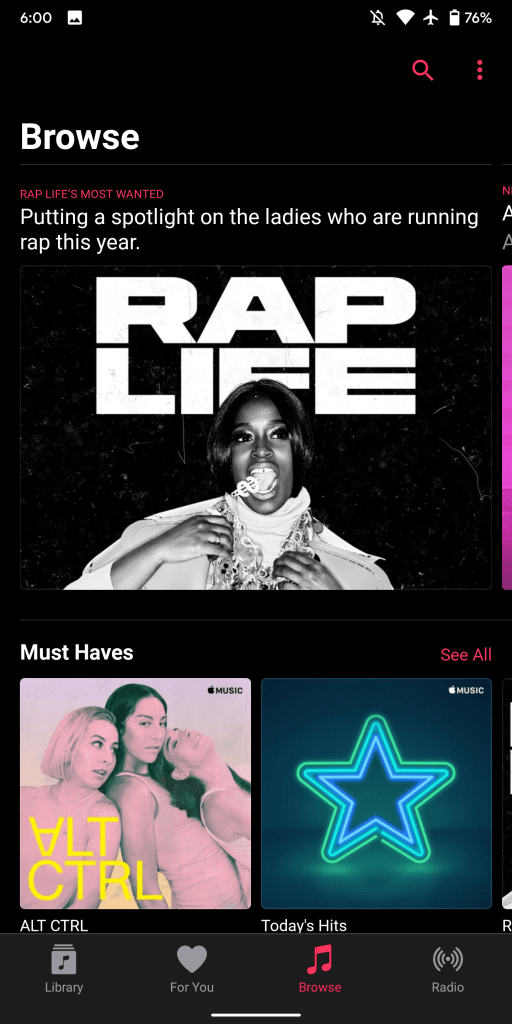 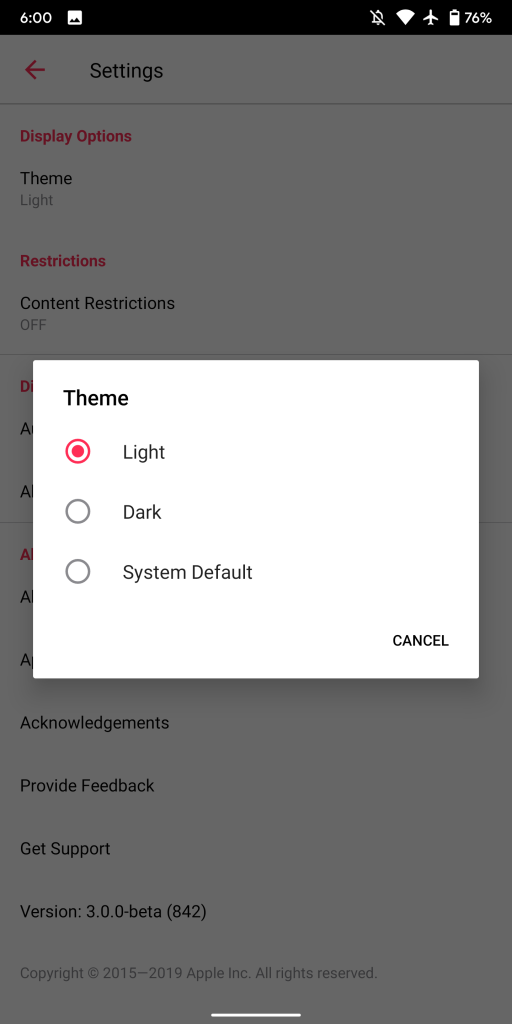 Google Chrome supports dark mode as of some recent updates, but many other Android browsers don’t. The normal Firefox doesn’t support the dark theme toggle, but Firefox Preview does. This setting can obviously be forced to either theme, but it’s nice to see that automatic dark mode support is on Mozilla’s radar and we hope it comes to the regular Firefox browser for Android.

While Gmail awaits its official dark mode update, Microsoft’s Outlook app has started rolling out the feature to its users. On Android, the app also supports the system-wide dark theme toggle. Unfortunately, that new theme isn’t available to all users just yet, but a Twitter user was kind enough to share the screenshots below.

Slack added a dark theme to its app not long ago, and in a recent update, that dark mode now respects the system default. You can manually force Slack to with light or dark themes, but by default the Android app now respects 10’s system-wide theme.

Android 10 still doesn’t have a built-in screen recorder, but there are third-party apps to do so. One I’ve used is simply called “Screen Recorder” and it works pretty well. The free app has no ads and works using Android’s built-in tools. Better yet, the app supports the dark theme toggle so you can adjust your screen recording settings in the dark. This isn’t set by default, though, as you’ll need to visit the settings and change the dark theme to “follow system.”

Just like Google Chrome, Microsoft’s Edge browser for Android supports a dark theme that respects the system toggle. This should apply for websites that support dark themes as well but it won’t change every site over.

Instagram surprisingly added support for the Android 10 system toggle recently. The app’s dark theme is based on pure black and encompasses the entire application.

SoundCloud’s Android app now supports the system-wide toggle. While it can be manually adjusted, the app respects the toggle by default with a dark-gray theme.

The popular podcast aggregator Pocket Casts recently dropped its paid requirement for a new subscription offering. Now, the app is also bringing support for Android 10’s dark theme toggle. The app itself has offered a dark mode toggle for some time now, but it was only a manual toggle. With its latest beta update, the app supports the system-wide toggle as well.

Long-known for its ability to recognize songs, Shazam recently debuted a dark mode for its Android app. The new dark theme uses a slightly darker-than-usual grey color which also, for the most part, ditches the app’s signature blue color. It can be manually toggled, but follows Android 10’s system theme by default.

What apps have you found that support Android 10’s dark mode toggle?

Obviously, this list isn’t going to be able to cover every Android app that supports 10’s dark mode toggle. If you’ve found an app that properly supports the system-wide dark theme toggle, drop a comment below and let us know! You can also hit me up on Twitter or via email regarding those apps and we’ll be sure to update this list. Hopefully, these developers can help to set an example for the rest.

HANOI (Reuters) - A court in Vietnam jailed a... If you're looking to snag a great de... 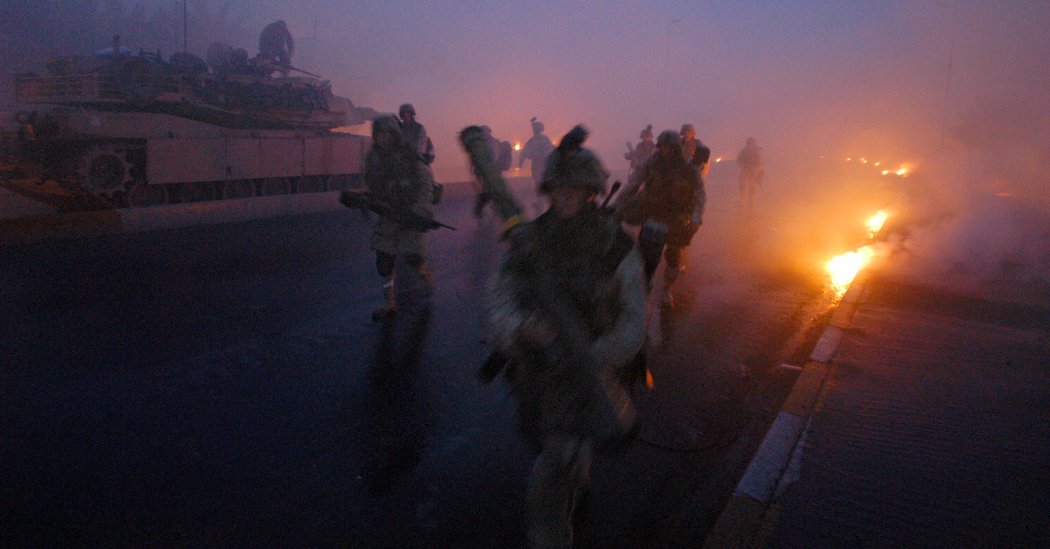 A Battle in Falluja, Revisited 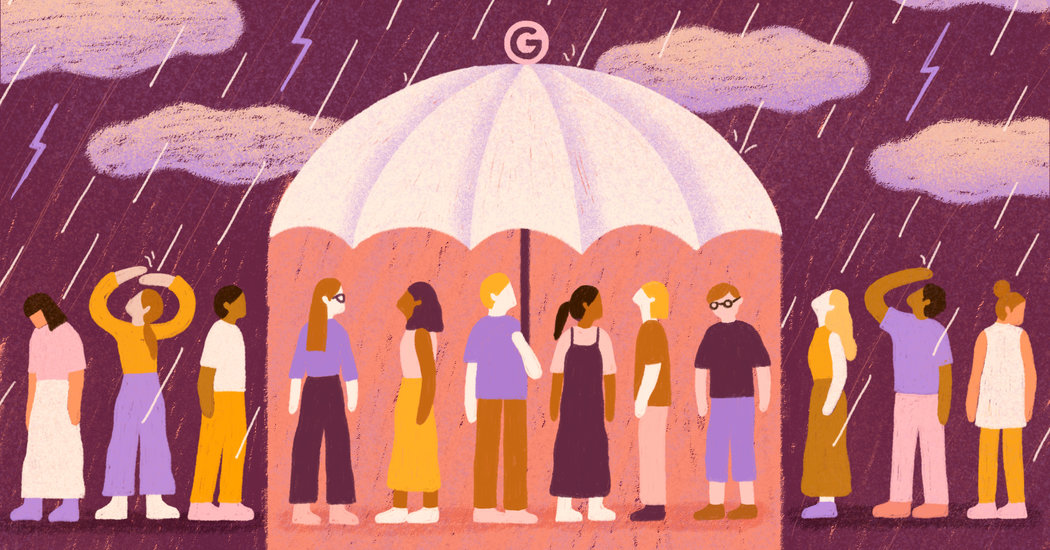 Google Should Google the Definition of ‘Employee’