Whether you're a conservative or a liberal, you have most likely come across a political hashtag in an article, a tweet or a personal story shared on Facebook.

A hashtag is a functional tag widely used in search engines and social networking services that allow people to search for content that falls under the word or phrase, followed by the # sign.

First popularized by Twitter in 2009, the use of hashtags has become widespread. Nearly anything political with the intent of attracting a wide audience is now branded with a catchy hashtag. Take for example, election campaigns (#MAGA), social movements (#FreeHongKong) or calls for supporting or opposing laws (#LoveWins).

Along with activists and politicians, news companies are also using political hashtags to increase readership and to contextualize reporting in short, digestible social media posts. According to Columbia Journalism Review, such practice is a “good way to introduce a story or perspective into the mainstream news cycle" and “a way to figure out what the public wants to discuss and learn more about."

Is this really true?

To find out, we conducted a controlled online experiment with 1,979 people.

We tested whether people responded differently to the presence or absence of political hashtags – particularly the most widely used #MeToo and #BlackLivesMatter – in news articles published on Facebook by major news outlets, such as The New York Times and NPR.

We randomly showed each person a news post that either contained or excluded the political hashtag. We then asked them to comment on the article and answer a few questions about it. 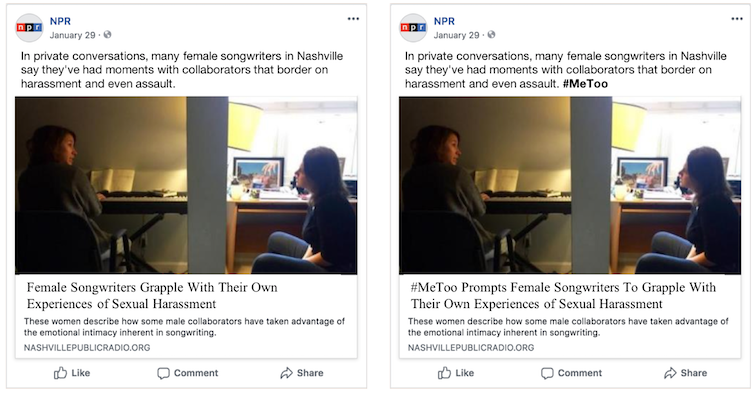 The original news post was identical to the one the right, except for the bolded #MeToo followed by the text description. For the control condition (left), we excluded the hashtag in the post text, as well as the phrase '#MeToo Prompts' in the headline.

We discovered that political hashtags are not a good way for news outlets to engage readers.

In fact, when the story included a hashtag, people perceived the news topic to be less important and were less motivated to know more about related issues.

Some readers were also inclined to view news stories with hashtags as more politically biased. This was especially true for more conservative readers, who were more likely to say a news post was extremely partisan when it included a hashtag.

Similarly, hashtags also negatively affected liberal readers. However, readers who identified themselves as "extremely liberal" did not perceive social media news content about gender and racial issues as partisan, regardless of hashtag presence.

What really interested me was the reaction from people in the middle. People who identified as politically moderate perceived news posts to be significantly more partisan when the posts included hashtags.

In fact, in their comments, politically moderate respondents who saw news posts with hashtags were more suspicious about the credibility of the news and focused more on the politics of the hashtag. 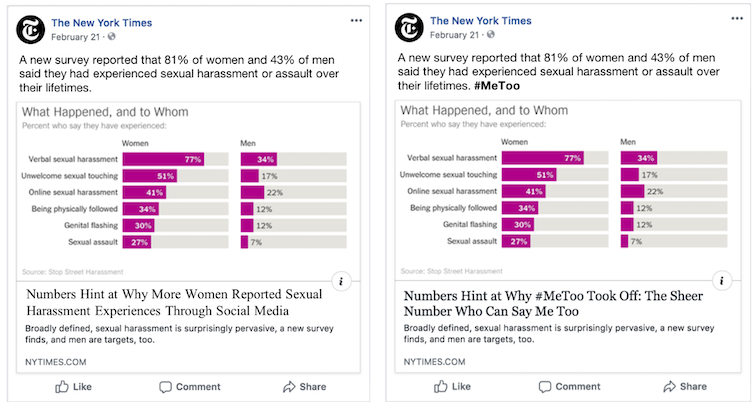 The news post on the right is identical to the original news post published on Facebook, except for the bolded #MeToo hashtag in the post text, which was not included in the original version.

For example in the hashtag group, politically moderate people repeatedly mention the hashtag without substantially engaging with relevant social issues:

"The #MeToo topic is turning into something like the Kardashians. You can't look at the news without both of them headlining things. It is an important issue, but I am getting tired of seeing it over and over."

By contrast, when hashtags were absent, readers were more likely to discuss the core ideas and values the hashtag was originally meant to represent.

"Giving a platform and voice to victims via social media is a great way to share one's experience when one is to uncomfortable to do so publicly. Some people are too afraid to report any harassment or assaults due to being labeled a liar so I'm glad there's a way to keep track of these instances without them going unheard."

The language used by participants from the hashtag group in their comments was more emotionally extreme. Even those who seemed to be in favor of the hashtag movement used aggressive language to convey support of the movement and referred to those against it as "You idiots," claiming, "there's a reason why [#MeToo] f****-ing exists, dimwits!!"

Even a simple practice, like branding a social topic with a catchy hashtag, can give off the impression to the public that hashtagged content, even news content published by major news companies, is hyper-partisan or untrue.

If we want to build and sustain healthy discussions online, then we need to start questioning how such practices influence the democratic health of the internet.

Using a hashtag can rapidly draw audience attention to pressing social issues. However, as our study shows, such viral momentum may be detrimental to online discussion around pressing social topics in the long run.

This article is republished from The Conversation under a Creative Commons license. Read the original article. Some users are reporting that Google Play Mu... 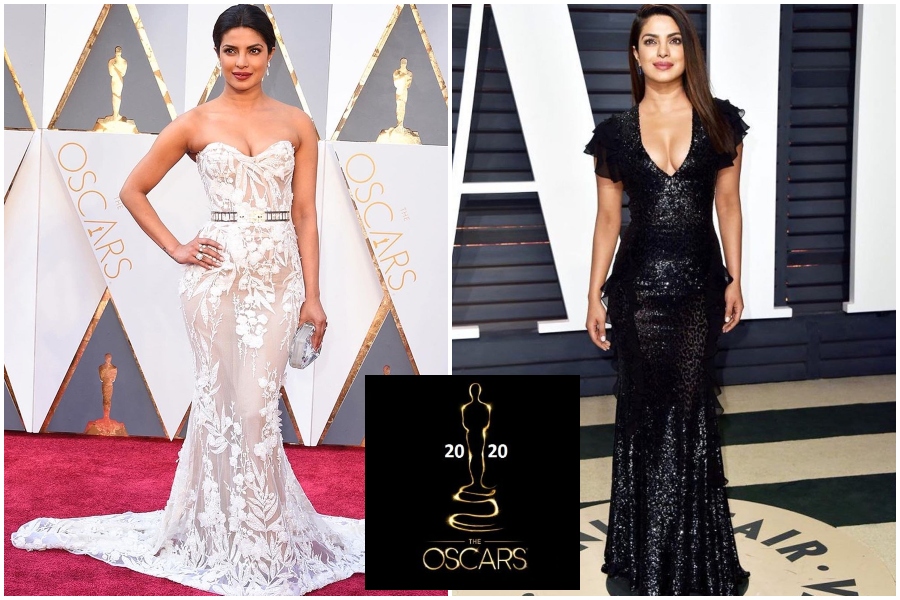 Priyanka Chopra goes through major FOMO as she skips Oscars 2020

We were told different reasons for exit: Sa... 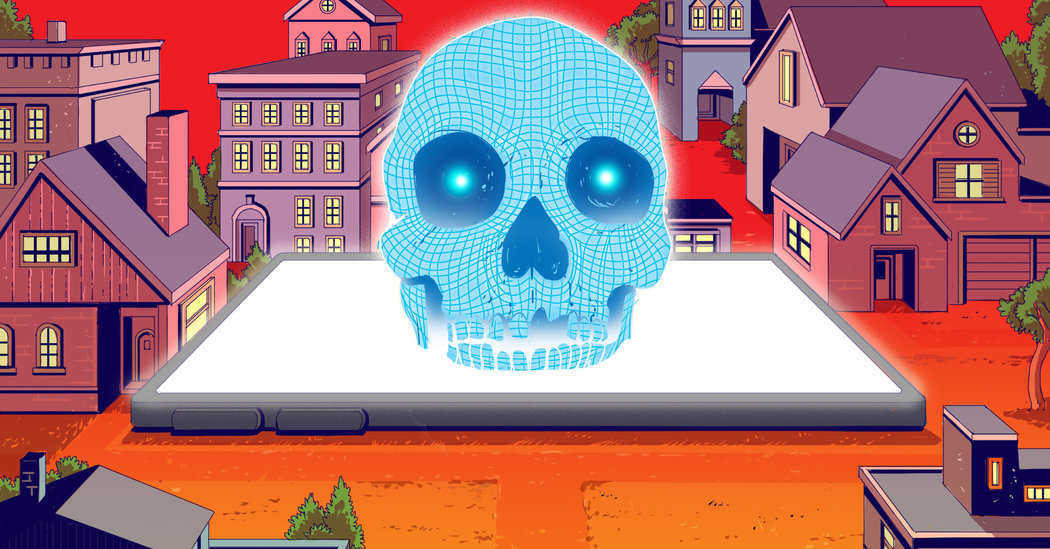 Neighborhood-watch networks are on the rise, ... 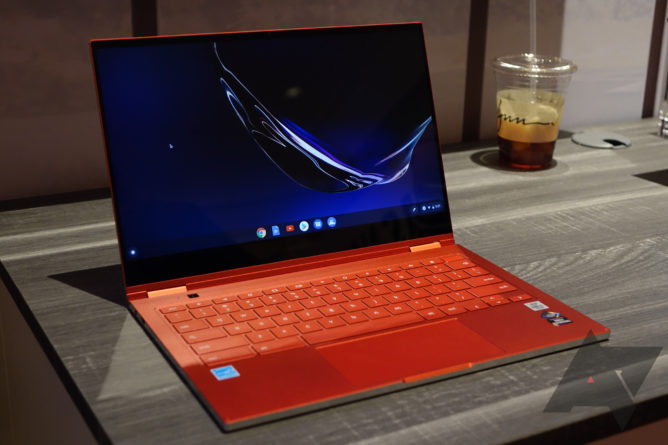 Chromebooks will now get up to eight years of updates (Update: Two eligible so far)

The greatest long-term issue with Chromebo...

Buffett And Munger Are Licking Their Chops

The financial markets have been under immense...

Criteo Trying To Rebuild A Stalled Growth Engine In Mid-Flight

As an ad tech company built around a machine ...