The iPad Pro’s single USB Type-C port is one of my main frustrations about an otherwise truly stellar piece of technology. You get to use it for one thing at a time, be it charging, using the USB-C headphone adapter, or plugging in a range of dongles (and soon, mercifully, external hard drives). I ask: can any device be “pro” if it has just one lonely port?

Thankfully, the jack-of-all-trades nature of USB-C means that you can use USB-C hubs to get those missing ports back — and then some. Apple provides very little guidance on which hubs work the best with the 2018 iPad Pro; all the company really says is that hubs and docks should both work over the USB-C connection. None of the products I tested had a badge on the box to indicate MFi / Made for iPad certification, but they all functioned (mostly) as expected.

If the iPad Pro is going to be your one and only computer, you might be drawn to USB-C hubs that are specifically designed to latch onto Apple’s flagship tablet. You can even keep them attached full-time if your iPad Pro is mostly used on a desk. The two I tested include USB-C (for both data and pass-through charging of the iPad), a USB-A 3.0 port, microSD, SD, HDMI, and a headphone jack. That’s a nice little assortment in a package that fits securely against the iPad Pro.

Most of these range between $90 and $100. I tried out the HyperDrive 6-in-1 iPad Pro USB-C hub, which began as a Kickstarter but is now available at retailers like Amazon and B&H. Attached to the aluminum hub is a grip that distributes the weight across more of your iPad to prevent strain on the USB-C port.

Note, however, that the unit I got from B&H lacks a second grip that’s compatible with screen protectors, which came bundled with the version Kickstarter backers received. USB-C is reversible, yes, but if you flip this bare-bones hub around, the longer grip edge will create enough of a gap between your iPad Pro and Apple’s keyboard to prevent it from working. If you don’t have a screen protector on your iPad, there’s nothing to worry about.

The HyperDrive did what it promised: the import screen in Photos quickly came up whenever I slid in an SD card. The USB-C port supports USB PD at up to 60W, which is plenty for charging the iPad Pro at the fastest possible speed, and I got a steady video feed from the HDMI jack on top. Mostly, I liked that the HyperDrive let me do so much at once. I could charge the iPad, charge my PowerBeats Pro (or anything else) through the USB-A port, and even listen to wired headphone audio when the need arose. The company also promises USB data transfer rates of up to 5 Gbps.

If the iPad Pro is your only computer, a latch-on hub might make sense

More recently, a funkier option has come along: a USB-C hub that wraps around one of the iPad Pro’s corners. The one I tested was from Kanex, and it’s being sold exclusively through B&H in the US. But it seems like this is a situation where Kanex is just stamping its name on a Chinese design that others are also using: the same product is on Kickstarter here as the BoltHub. (Based on the comments, I’d stay away from that campaign.)

Anyway, I take great joy in how out-there this thing is, even if a USB plug coming out of the top will never look anything but utterly ridiculous. A permanently affixed USB-C cable plugs into your iPad and powers the hub, which is designed to be used with or without Apple’s Smart Keyboard Folio. (There’s a spacer that magnetically hooks onto the hub’s interior if you need to use it with the iPad by itself.) The oddball design doesn’t net you any extra ports compared to the HyperDrive. It’s the same selection (albeit with USB 3.1 instead of 3.0), but hey, this style makes the iPad Pro look like some sort of sci-fi computer. Behold!

Unfortunately, this hub is machined so precisely that it’s not going to fit right if you’ve got a tempered glass screen protector on your iPad Pro because the edges will start lifting up. You can get it on there enough to where it won’t come off, but I didn’t love the idea of the glass protector being tightly squeezed against the iPad’s very expensive display.

It’s also just not the smartest investment. When Apple inevitably makes changes the iPad Pro’s design, what are you going to do with this thing when you upgrade?

Traditional hubs are probably still the way to go

I can see the allure of these hubs that are designed to be matched with an iPad Pro. But overall, I came away preferring a more traditional USB-C hub from Belkin. It includes Ethernet, which can prove important in hotels and other travel situations or if you favor working with a wired internet connection at home.

It also has two USB-A ports (with 15W of shared power output), HDMI, and an SD card reader. (No microSD on this one, but I never use those cards, and you can use an SD adapter if you need to.) The single USB-C port supports both USB power delivery charging (60W) and data pass-through. There’s no headphone jack, but the full-service USB-C option allowed me to plug in Apple’s headphone adapter so I could monitor audio when I was recording guitar through a mic plugged into one of the USB-A ports. I had zero expectation that this scenario would work properly, but it did. Score one point for USB-C hubs. (This convenience also applies to the HyperDrive and Kanex.)

Apple recently began selling a $69.95 Satechi USB-C hub in its stores. It gives you a single USB-A 3.1 port, microSD / SD, and HDMI in a very lightweight hub. But it doesn’t strike me as the best option around. For one, as best I can tell, it’s basically the same thing Satechi sells on Amazon — but with just one USB-A port instead of two. More importantly, its USB-C port is only for charging, not data connections, which limits its usefulness. For the iPad Pro, specifically, this also leaves you without a headphone jack solution. And last, it doesn’t lay flat when used with a 12.9-inch iPad Pro propped up in a Smart Keyboard, if that’s something that’ll bug you.

If you’re going the standard USB-C hub route, there are endless options to choose between, and you certainly don’t need to choose the $100 Belkin. HyperDrive just put out this 9-in-1 hub that includes a headphone jack in a more standard form factor. However, I wish more companies were following TwelveSouth’s example and moving away from the built-in USB-C cable. That cable is inevitably going to face a lot of wear and tear and could give out long before any of the technology inside the hub itself does.

I’ll leave you with a few last observations from my experiences in trying to unleash more port power on the iPad Pro.

Even with those caveats, I think a hub is worth carrying in your iPad Pro bag for that one time you really need it. Just as with keyboards for Apple’s tablet, there’s no perfect option for everyone, but several contenders might appeal to you for one reason or another.

Maybe next time Apple could just add another USB-C port. If the iPad Pro is worthy of its own operating system, I think it’s also worthy of new I/O options and evolving from this idea that iOS products can only have a single connector on the bottom.

Vox Media has affiliate partnerships. These do not influence editorial content, though Vox Media may earn commissions for products purchased via affiliate links. For more information, see our ethics policy. 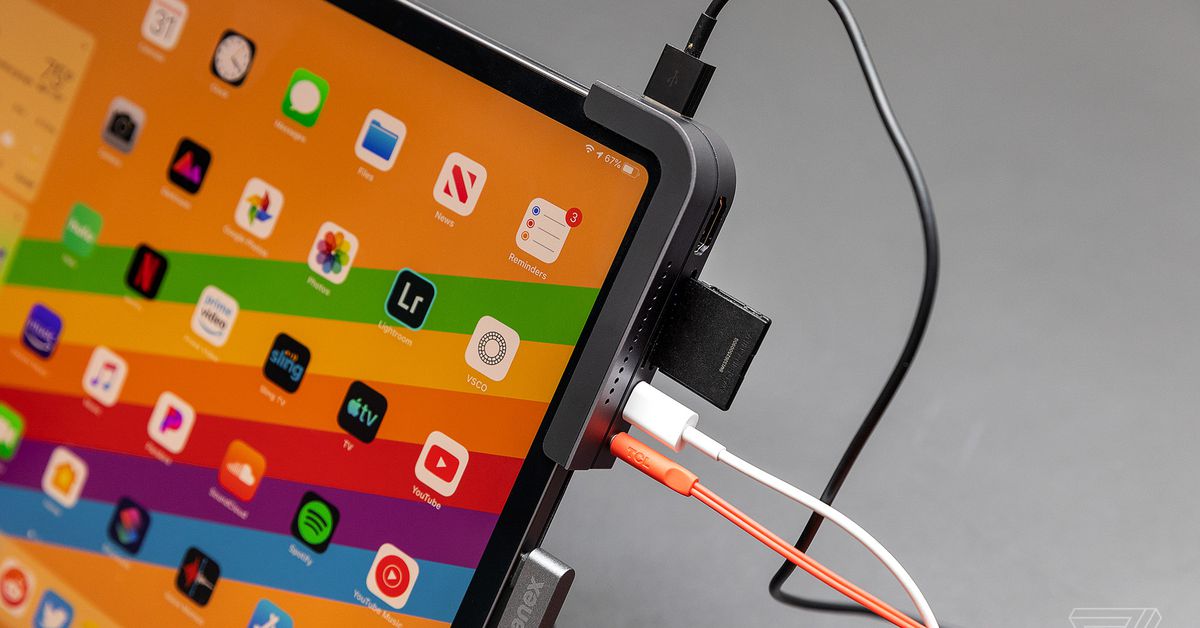 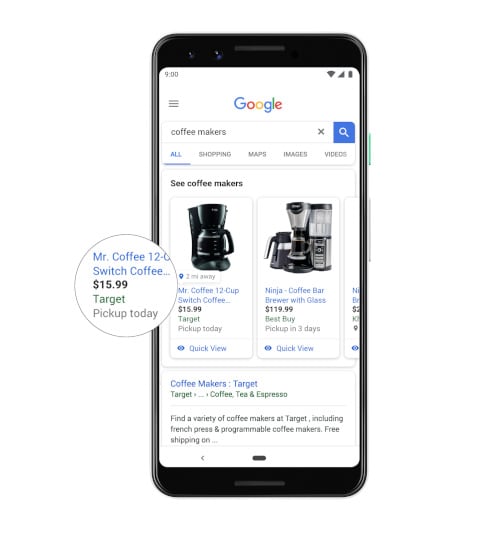 Google's universal shopping cart will work across Search and Images

Say, you run a search query for headphones: ...

Why conspiratorial thinking is peaking in America

Idris Elba Is Backing Away From Social Media: "It Makes Me Feel Depressed"

Depending on how you look at it, social media... 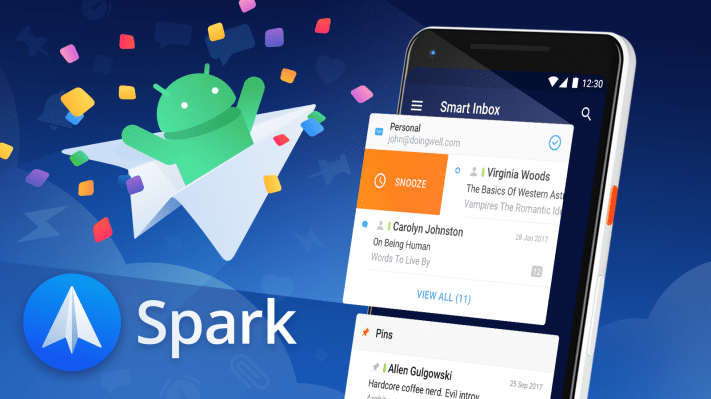 Spark has managed to attract one million use...