Despite Current Headwinds, Exterran Will See Growth In The Long Term

Exterran Corporation (EXTN) serves the natural gas processing and the midstream infrastructure business in the energy sector. It also provides aftermarket parts and services. While falling natural gas prices may keep the stock price under pressure in the short term, I think it will produce steady returns in the medium to long term. The long-run drivers for EXTN remain strong due to the increased demand for natural gas processing and related services, including midstream infrastructure. There is a growing demand for natural gas processing from many of the international markets. On top of a robust backlog in contract operations, the company expects to add $300 million to $500 million in ECO contracts within a year.

However, the Product Sales segment backlog fell in Q1, while there is pressure on the ECO segment operating margin because of excess capacity in the natural gas compression market. Although the company’s leverage is on the higher side, it has no debt repayment risks in the short term. 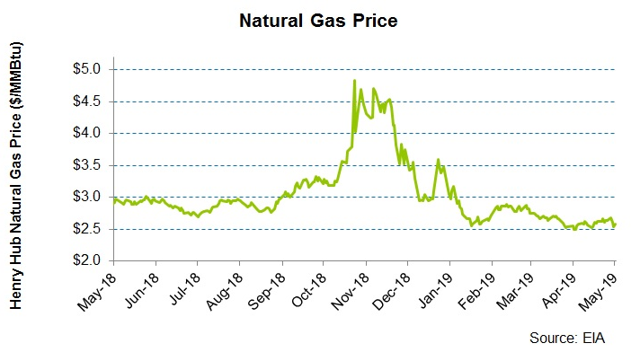 EXTN’s operations are closely linked to natural gas production and demand. During Q1 2019, the Henry Hub spot price for natural gas declined by 9% compared to the beginning of the year. The weakness has continued further (3% down) until May 23. Lower natural gas price can affect Exterran adversely in Q2 2019. For the full year 2019, EIA now estimates $2.79/MMBtu, which is higher compared to the current price.

In 2020, the natural gas estimate for spot prices would average $2.78/MMBtu, which would again be slightly higher than the current price, but lower than in FY2018. According to the EIA, total dry natural gas production is estimated to increase by 47% from 2018 through 2050, which will increase the need for natural gas compression, thereby increasing the requirement for gas compression and related products and services. While an improved price would be positive for natural gas processing and midstream infrastructure providers like EXTN in the medium-term, the falling price is a concern in the short-term. 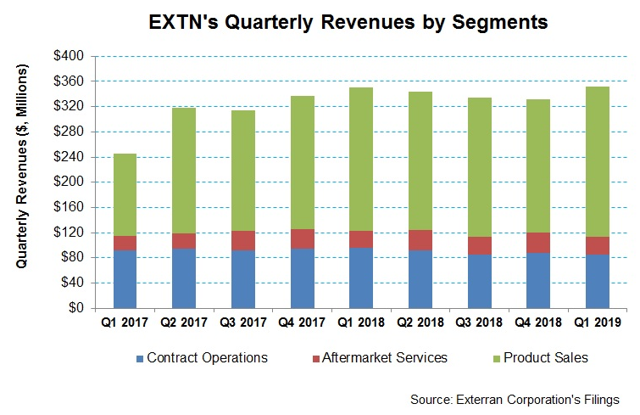 Let us see how the company performed in Q1 2019 despite the pressure on natural gas price. In Q1 2019, Exterran Corporation’s top line improved compared to Q4 2018. Although its Contract Operations and Aftermarket Services segment revenues decreased, the decline was more than offset by higher Product Sales segment revenues, leading to ~6% sequential rise in the top line.

One of the primary drivers in Q1 was Exterran Contract Operations (or ECO) contracts. The company commercialized the RevoLift in the U.S. under an ECO contract. The other key factor was a $25 million boost in the orders in The Product Sales segment during Q1. On the other hand, the adverse effects of seasonality and the deferral of contract re-negotiation skimmed off some of the revenue growth in Q1. These factors also led to operating margin fall in the ECO segment in Q1. The company expects to add between $300 million and $500 million in ECO contract renewals in the next 12 months.

Before moving on to international opportunities, let us first check out EXTN’s emerging technology. In the U.S. unconventional shales, its plans to integrate microbubble technology with the RevoLift is getting traction. It signed the first ECO contract during the quarter. The company is also venturing into the midstream water business, which can turn out to be more profitable than its current portfolio. 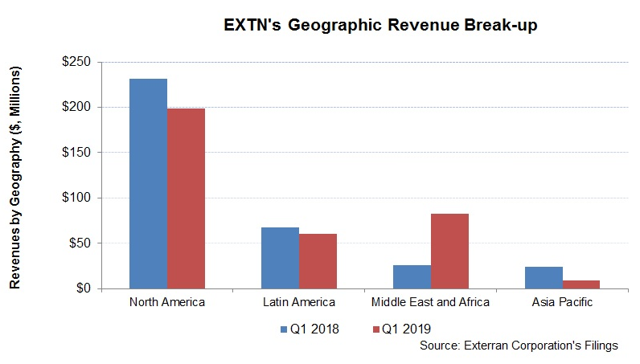 Over the medium-to-long-term horizon, EXTN may see a much-improved demand from the global natural gas operators because many of these countries are looking to provide residential and commercial power using natural gas. Some are also planning to become net exporters through LNG buildout as new gas field discovery gets monetized over the next few years.

In Brazil as well as in some of the smaller Latin American countries, EXTN sees growth in demand, although the political changes and policy alterations in Argentina can bring in challenges. In Asia, the FPSO market is getting robust. The Middle East market also provides short and long-term opportunities, because the drilling activities in these places can lead to more natural gas development. Regarding the outlook in the Middle East, here is what the management commented:

we're very encouraged at both the short-term opportunities that we see sort of over the next 12 to 18 months and started really working with some of our customers on the longer term, sort of the 2- to 3- to 4-year outlook and looking at some of the activity that they're planning on drilling that would lend itself to more gas development.

EXTN is not seeking every opportunity that’s present in the market, but filtering and picking those that have high returns potential following the management views. In 2017, it exited the Belleli EPC product sales projects, while in June 2018, it sold the North America production equipment assets. To improve margins within the compression business, the company is consolidating the two Houston compression facilities and streamlining production to reduce costs. After the consolidation process, the Product Sales segment margin is expected to improve from the current level. In Q1 2019, the Product Sales segment operating margin decreased to 12.1% compared to 12.6% a quarter ago. The company, however, was able to bring down SG&A costs as a percentage of revenue. It plans to improve the SG&A margin more as it continues to strengthen the margin-mix in its order flow.

Continuing with the company’s pursuit for high-margin services, it estimates that over $100 million of compression orders didn't meet its internal threshold for double-digit margins. In the compression industry, there have been more players in the market, while the established players have been building capacity to meet the anticipated rise in demand. EXTN, in response to the expected demand recovery, is consolidating the Houston manufacturing facility, which is expected to become fully operational by Q1 2020. 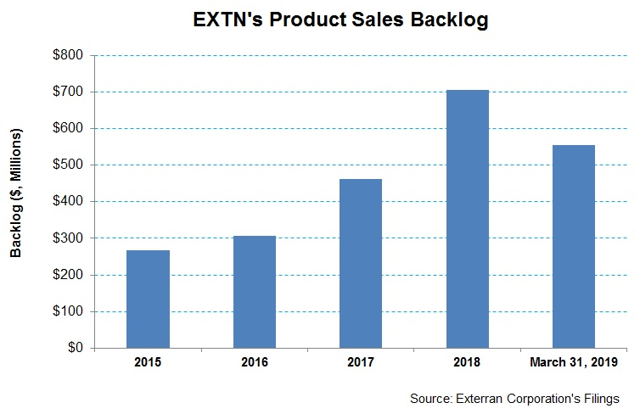 As of March 31, 2019, the company’s Product Sales segment backlog reduced by 21% compared to the segment backlog at the beginning of the year. The lower backlog can affect the EBITDA guidance for FY2019. Earlier, in Q4 2018, the company expected EBITDA to remain in the Q4 2018 neighborhood, with a slight negative bias from an unfavorable product mix. Per the Q1 update, it now expects EBITDA to stay at the low end of the prior guidance.

Overall, EXTN had $1.35 billion of unsatisfied performance obligations as of March 31, 2019, in the Contract Operations segment which can also be termed as its backlog. Approximately $226 million of this is expected to be recognized as revenues in the last three quarters of FY2019. Typically, the compressor equipment backlog has a 12-month lag before delivery, while for the processing and treating equipment backlog, the period ranges from six months to two years.

Despite generating positive cash flow from operations (or CFO), EXTN’s free cash flow (or FCF) has not been steady. Led by higher revenues, the company’s CFO doubled in Q1 2019 compared to a year ago. Despite that, its FCF turned negative in Q1 because its capex exceeded CFO. In Q1 2019, capex increased by 55% over a year ago due to higher expenditure on contract operations services contracts in the Latin America region.

As of March 31, 2019, EXTN’s capacity to borrow under the revolving credit facility was $548 million while cash and equivalents were $18.5 million. It has $35 million debt repayment due in 2023, while the bulk of its debt repayment ($375 million) would be due in 2025. So the company does not have any near-term financial risks.

EXTN’s debt-to-equity (0.76x) is higher than many of its peers, including Newpark Resources (NR) (0.33x). Its OFS peer Matrix Service Company (MTRX) has nearly zero debt, while RPC, Inc. (RES) has no debt.

What Does The Relative Valuation Imply?

According to data provided by Seeking Alpha, three sell-side analysts rated EXTN a “buy” in May 2019, while none recommended a “hold” or a “sell”. The consensus target price is $31.3, which at the current price yields ~128% returns.

According to Seeking Alpha’s Quant Rating, the stock receives a “Very Bearish” rating. It scores poorly on all the parameters including value, EPS revisions, growth, profitability, and momentum.

What’s The Take On EXTN?

The long-run drivers for EXTN remain strong due to the increased demand for natural gas processing and related services including midstream infrastructure. There is also a growing demand for natural gas processing from many of the international markets. On top of a robust backlog in contract operations, the company expects to add $300 million to $500 million in ECO contracts within a year. Although the company’s leverage is on the higher side, it has no debt repayment risks in the short-term.

While the Product Sales segment was the growth driver in Q1, the fall in backlog in this segment can become a concern. There is pressure on the ECO segment operating margin because of excess capacity in the natural gas compression market. It is not uncommon for a smaller player like EXTN to be FCF negative or having a higher leverage ratio. While falling natural gas price may keep EXTN’s stock price under pressure in the short-term, I think it will produce steady returns in the medium to long term. 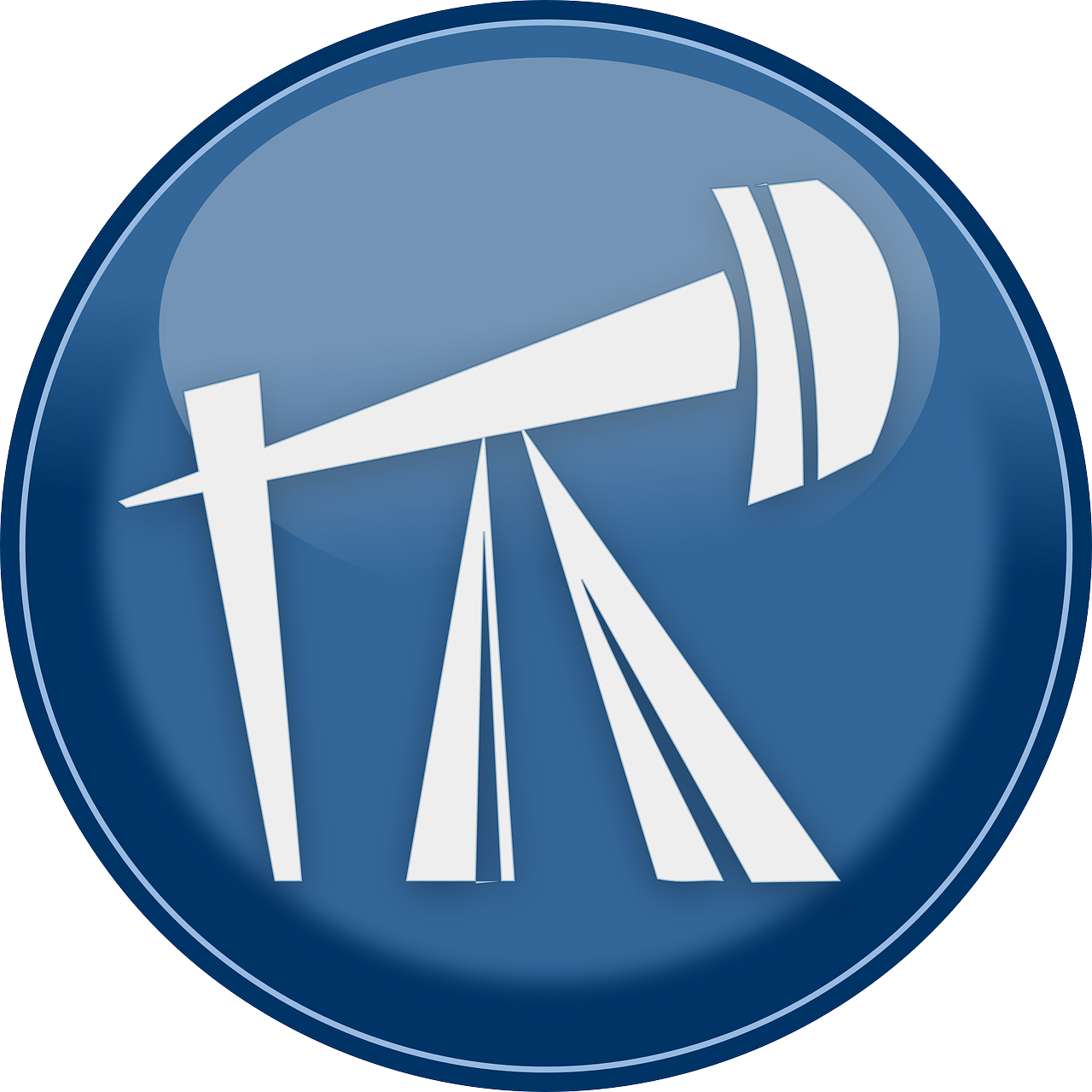 Deal: Google's most expensive smart speaker, the Home Max is on sale for $145 off

The Home Max is not only the most expensi...

The full Android 10 update has been availabl...

We’ve been talking about the Galaxy N...

Photo: ShutterstockTweens and teens used to ...

AirPods are the hottest item of Black Friday...