After spending years in the limelight, Canada Goose's (GOOS) luck seems to have run out. The maker of the iconic, high-priced puffy jackets has plunged more than 20% after missing growth estimates in Q4 and subsequently guiding softly for the upcoming year. This is a company that, up until this point, has seen surging growth akin to that of a technology company - and since its IPO, investors have often treated it with high growth stock multiples. Now, the stock is at 52-week lows:

Whenever a perennially expensive stock hits 52-week lows, investors should perk up. We have to ask ourselves: has anything materially changed in Canada Goose's landscape, or is this merely a minor road bump? At the end of last year, Canada Goose was firing on all cylinders, boosting its guidance for FY19 and sounding off positive notes about its first launch into the Chinese market.

This strength, in my view, is still prevalent. Canada Goose saw tremendous double-digit revenue growth in each of its geographic segments: 28% y/y in its home market of Canada, 36% y/y in the United States, and 61% in the "rest of world" - no doubt owed to strong performance in the company's newly-launched Beijing storefront. More "market activations" are planned in the coming quarters, giving Canada Goose to continue leading the pack in a category it defines as "performance luxury."

We should view the company's softer FY20 guidance, then, with a bit of skepticism. Chalk it up to management conservatism, and setting hurdles that can easily be crossed. Coming off a year in which Canada Goose grew revenues at 40% y/y, is it feasible to believe that the company will only grow in the ~20% y/y range in FY20 - especially given that the China launch will be a revenue contributor in all four quarters this year? 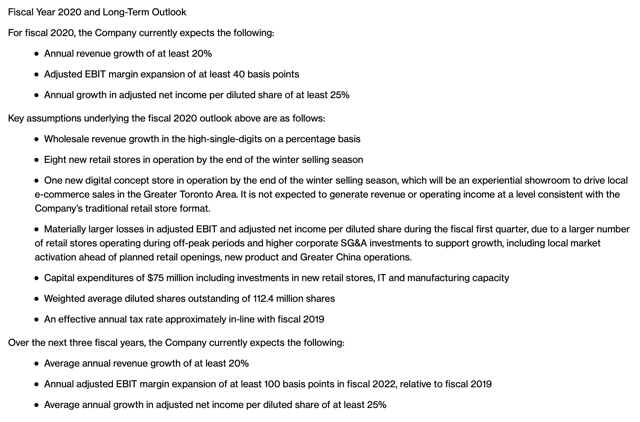 As a Canada Goose investor, I'll concede that I'm disappointed by the lighter revenue forecast and the expectation of margin headwinds, due to operating stores during off-peak season and higher expenses to support growth. At the same time, however, I'm inclined to dig in and dollar-cost average down as the stock plummets.

Stay long on Canada Goose and ignore the near-term weakness.

Here's a look at how Canada goose performed in its most recent quarter: 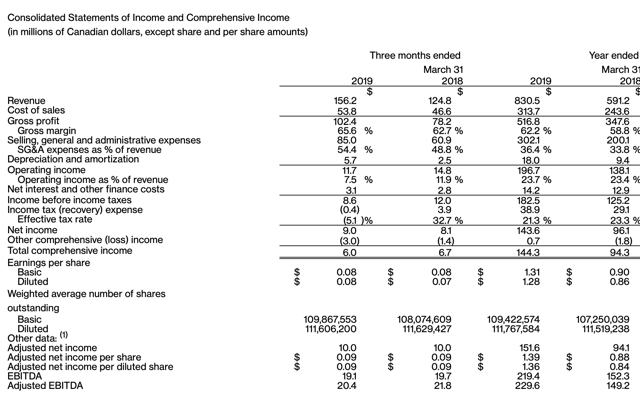 The biggest disappointment here was revenue growth, which slowed down to 25% y/y growth to $156.2 million - a marked deceleration relative to 50% y/y growth in Q3. Wall Street, on the other hand, had expected $158.9 million in revenues - or 27% y/y growth.

While it's rare for Canada Goose to miss on growth estimates, it's important to put this quarter's miss in context. For Canada Goose, Q4 is essentially a non-consequential quarter. You'll notice that Q4 revenues only accounted for 19% of the FY19 total. Canada Goose's big selling season in the third quarter - while the company still does some volume of direct sales in the fourth quarter, there's limited indirect channel loading in the fourth quarter.

It's also important to note that Canada Goose has commented on strong performance underway in the spring season (fiscal Q1). The company has been diversifying its revenue base away from winter products, especially with its acquisition of Baffin (for roughly $25 million) marking an entry into the footwear category. Dani Reiss, Canada Goose's CEO, noted as follows on the Q1 earnings call:

Every year our spring products have gotten better and better and without a doubt, this year's selection is the best expression of Canada Goose today. Across on entire offering including rainwear, windwear and knitwear, we really moves with the needle.

Spring grew at a significantly faster rate than the rest of our business, which is exactly what we want to see at this stage of development. We're making great progress. We are learning a ton, and I'm very confident about our future in spring. We are one of the most powerful aspects of our fall/winter collection, is that we have a strong foundation of core styles they grow year-after-year, in over time they turn into enduring icons.

This year, we will follow the same strategy for spring putting our efforts around a smaller number of Hero product in order to see new generations of icons and adapt to our core in the years to come."

In short, it's premature to be overly worried about Canada Goose's growth trajectory. The company barely missed revenue estimates in the smallest quarter of the fiscal year, while bullish commentary on spring sales and overall trends suggest that Canada Goose's ~20% y/y growth forecast for FY20 may be too conservative.

Instead, I'd focus more on the gross margin gains in the quarter. Gross margins ticked up 290bps to 65.6%, far better than a consensus of 64.3%. Gross margins as high as these offer a small justification for Canada Goose trading at tech-stock multiples. It's also worth pointing out that gross margins in the mid-60s are the envy of the retail sector. Compare that against other higher-end brands in the apparel sector:

These margin gains were offset by higher selling, general and administrative expenses, which increased by roughly six points as a percentage of revenues. Canada Goose explained that it has onboarded more than 1,000 new employees over the past year alone, a large part of which is attributed to supporting the China launch.

As a result, operating income slimmed down to C$11.7 million, down -21% y/y from C$14.8 million in the year-ago quarter. Nevertheless, the company's pro forma EPS of $0.09 still beat Wall Street's estimates of $0.04 by a substantial margin.

Note as well that Adjusted EBITDA, Canada Goose's primary profit metric, remained more or less flat at C$20.4 million, exceeding Wall Street's mark of C$17.7 million with 15% upside. All in all, Canada Goose's slight revenue miss is more than offset by better-than-expected gross margin gains and a beat to profit estimates - certainly nothing that warrants a 30% stock correction.

Canada Goose is a perennial investor favorite that is now trading at a steep discount. Investors have largely overreacted to a slight growth stumble (despite bullish commentary on spring sales underway) and a disappointing forecast for FY20, without taking into account management's usual tendency toward conservatism.

Recall that when Canada goose initially released guidance for FY19, the company had predicted "at least 20%" and "at least 25%" y/y growth in revenue and EPS, respectively.

With this fourth-quarter earnings release, Canada Goose actually topped off FY19 with 40% y/y revenue growth and 62% y/y EPS growth. The point here: Canada Goose's initial pass at forward-year guidance is typically far off the mark. For FY20, Canada Goose has issued the sane 20% and 25% y/y growth targets for revenue and EPS; while growth rates are sure to decelerate from FY19, FY20 will likely still come in far above what investors are giving the company credit for at the moment.

Buy the crash and wait on the recovery.

Disclosure: I am/we are long GOOS. I wrote this article myself, and it expresses my own opinions. I am not receiving compensation for it (other than from Seeking Alpha). I have no business relationship with any company whose stock is mentioned in this article. 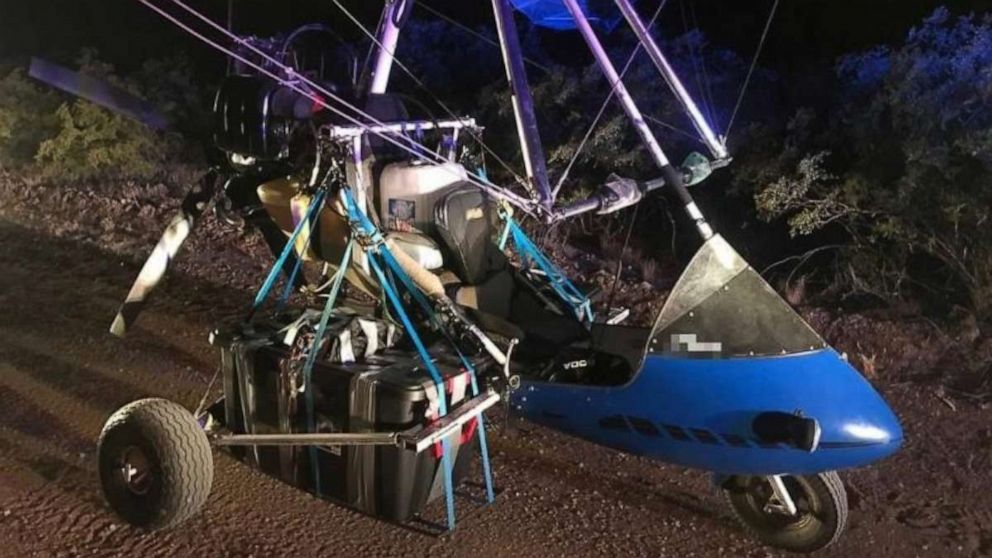 Border Patrol seizes aircraft loaded with meth, fentanyl after it flies into US

An ultralight aircraft carrying half a mill... 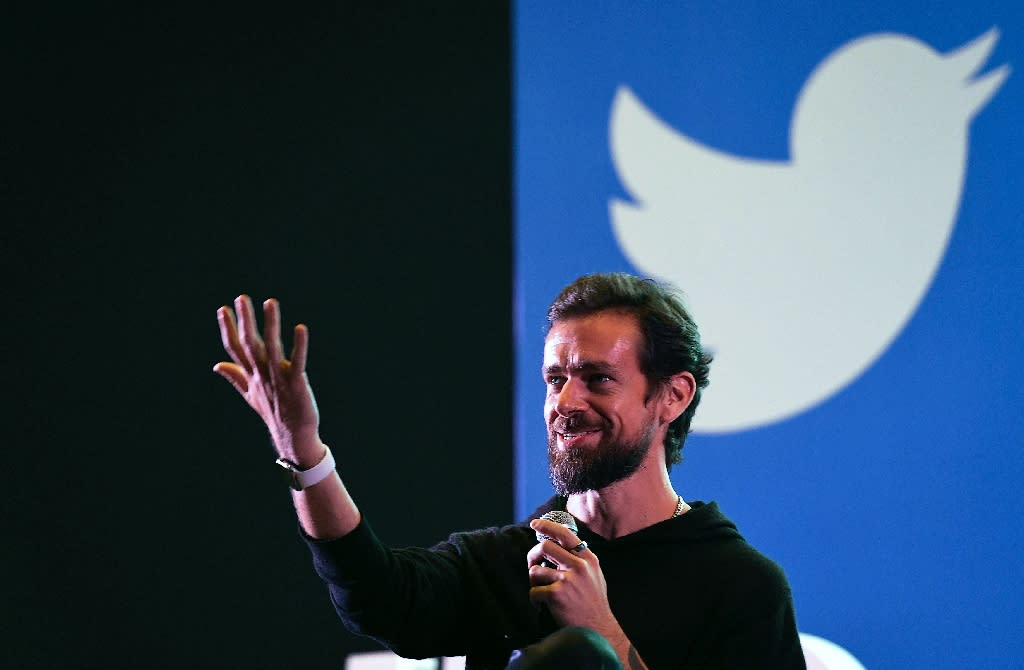 Whether you're a touch-typist, a hunt... 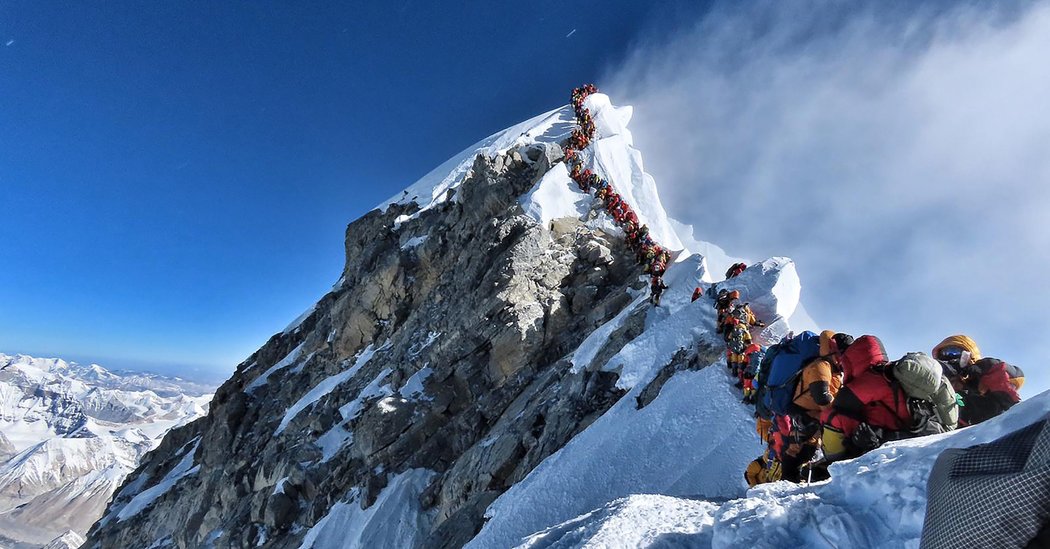 On Everest, Traffic Isn’t Just Inconvenient. It Can Be Deadly.