Theresa May's widely expected decision to step down as leader of the Conservative Party is likely to be a game changer for the Brexit process. It has been more than a thousand days since the UK voted to leave the European Union (EU), yet little real progress has been made on the negotiations since then. Ms. May's Withdrawal Bill - an essential legislative component of a negotiated Brexit - has been rejected by Parliament three times. Two rounds of indicative votes among Members of Parliament (MPs) have failed to establish a consensus for any form of Brexit. The process has effectively come to a dead end under Ms. May.

The arrival of a new prime minister (PM) will inject a significant impulse of political energy into the Brexit debate and looks set to break the current deadlock. While it is hard to predict where the Brexit process will be when the October 31 deadline is reached, something significant is likely to have happened by then. The negotiated phased-in Brexit that Ms. May was pursuing now seems an unlikely outcome, whereas a no-deal Brexit, a 2019 general election and a second referendum all seem more probable than they were a few weeks ago.

There is a good chance that the new PM will be in office by the end of July. Everything suggests that the new leader will win on a fairly euroskeptic campaign, centered on a "renegotiate or no-deal" Brexit policy. This sort of campaign will delight the grassroots membership of the Conservatives, with a recent Party survey indicating that 75% of members would vote for a no-deal Brexit.* It is also likely to receive broad support from Conservative MPs, of whom 157 voted in favor of no-deal in the March 27 indicative votes compared to 94 who voted against. The sizable vote swing toward euroskeptic parties in the European parliamentary elections will only provide further encouragement for this sort of campaign.

However, it will not take long for the newly appointed PM to realize just how difficult it is going to be to implement the form of Brexit that has swept him or her into power. The first clash with reality will be when the new leader engages with the EU. One of the earliest priorities of the new PM is likely to be an attempt to reopen negotiations with the EU on the withdrawal agreement, particularly focusing on the Northern Irish backstop. Brussels is unlikely to give much ground to a British leader who is actively campaigning for a no-deal outcome. Assuming, as we do, that no meaningful renegotiations take place, the new PM will then be faced with the following difficult choices:

There are no easy choices ahead for the new prime minister where Brexit is concerned. We will probably know who the new PM will be in a couple of months but might have to wait for weeks or months beyond that before we know what path he or she will take to the October 31 Brexit deadline. One thing that does seem clear now, however, is that the probability of a negotiated exit has fallen significantly with Ms. May's departure. Instead, a number of Brexit outcomes that looked like tail risk scenarios a few weeks ago now seem more likely. If we look to betting markets to help quantify the probabilities here, we see that a no-deal Brexit, no Brexit (Article 50 revoked), a 2019 general election and a second EU referendum are now all seen as being equally probable outcomes. 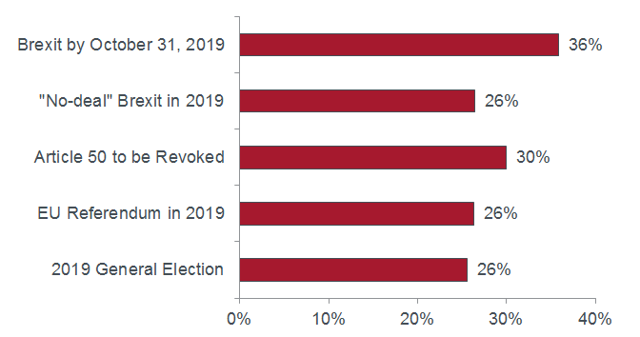 Source: Probabilities based on Betfair odds as of 5/28/19.

While it remains difficult to predict how things are going to evolve on the Brexit front, we do know that something significant is likely to happen by October. The era of Brexit delays and extensions is probably over, and some big decisions will need to be made in the next few months. This will not be an easy environment for investors to evaluate, given the inherently political nature of the process and the inevitable bluffing and brinkmanship it will bring. While it is hard to see sentiment toward sterling and UK assets improving through this fog of uncertainty, a certain amount of gloom is already priced in. We would expect the pound to come under downside pressure if the no-deal scenario becomes more probable but to have significant upside on a no-Brexit outcome.

*Conservativehome.com survey, "How Party members would cast indicative votes. They are overwhelmingly for no deal"

Disclaimer: Please consider the charges, risks, expenses and investment objectives carefully before investing. Please see a prospectus or, if available, a summary prospectus containing this and other information. Read it carefully before you invest or send money.

The opinions and views expressed are as of the date published and are subject to change without notice. They are for information purposes only and should not be used or construed as an offer to sell, a solicitation of an offer to buy, or a recommendation to buy, sell or hold any security, investment strategy or market sector. No forecasts can be guaranteed. Opinions and examples are meant as an illustration of broader themes and are not an indication of trading intent. It is not intended to indicate or imply that any illustration/example mentioned is now or was ever held in any portfolio. Janus Henderson Group plc through its subsidiaries may manage investment products with a financial interest in securities mentioned herein and any comments should not be construed as a reflection on the past or future profitability. There is no guarantee that the information supplied is accurate, complete, or timely, nor are there any warranties with regards to the results obtained from its use. Past performance is no guarantee of future results. Investing involves risk, including the possible loss of principal and fluctuation of value. 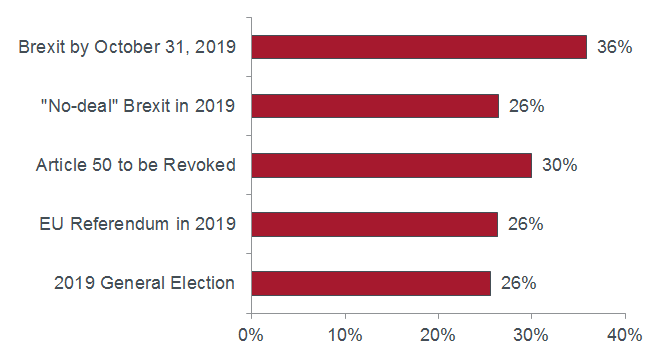 You used to need a new smartphone every year ...

Billions of fake accounts: Who's messaging you on Facebook?

Last May, the US government placed Huawei on... 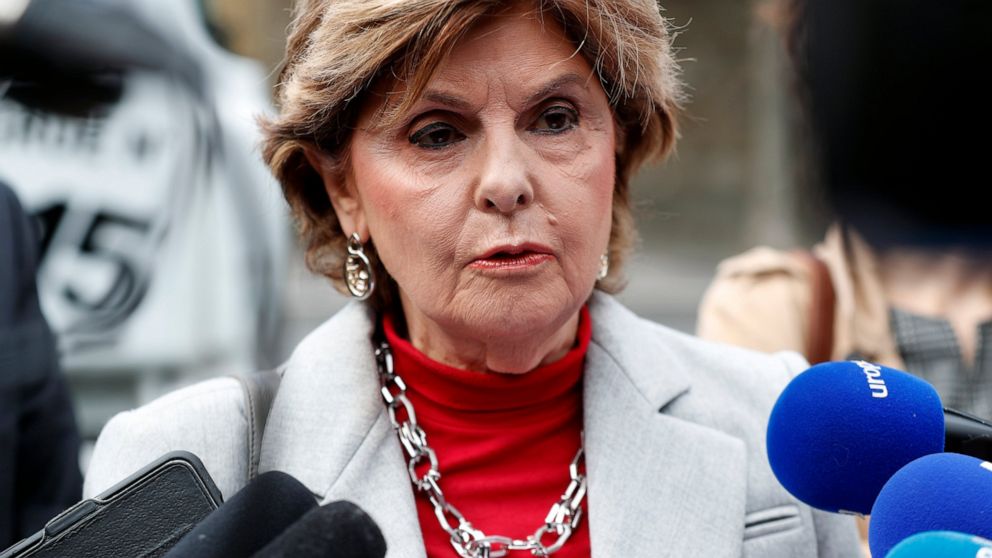 The lawyer for a woman who filed a rape com... 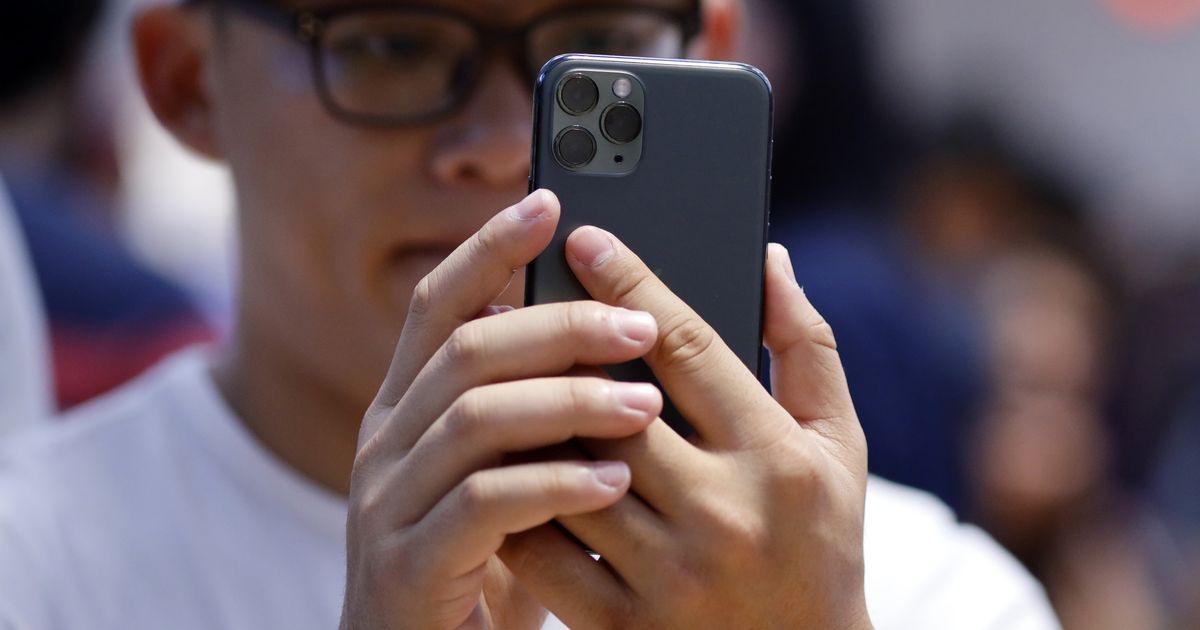 The new Apple iPhone 11 Pro has an interest...