Apple: While Consumers Aren't Upgrading As Often, They Are Still Being Monetized

For a number of years now, total unit sales for Apple's (NASDAQ:AAPL) single largest product, the iPhone, has been relatively flat (see chart below). Unit sales peaked in fiscal 2015 and have bounced around 215 million per year ever since. 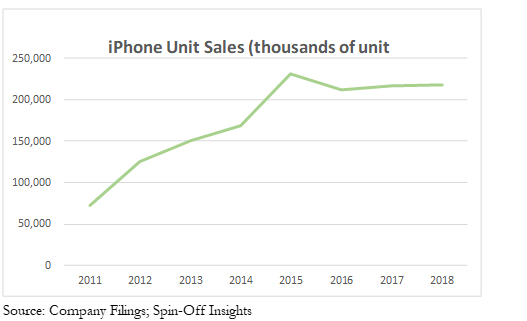 Investors and analysts obsess over iPhone sales on a quarterly basis, debate how often consumers will upgrade devices, and wonder if Apple can maintain its pricing power. While these are important topics and investors should certainly think through consumers' loyalty to the company and their propensity to upgrade to a new phone, it does miss an important mix shift occurring within the business.

Apple is increasingly monetizing its "global installed base" of over 1.4 billion active devices, of which over 900 million are iPhones, through the Services business. This business is driven by a handful of key drivers:

While iPhone sales can't grow at anything like its historical rate, Apple has found ways to squeeze more and more sales out of its global installed base of devices. As you can see in the table below, the Services business has steadily grown from just over $9.3 billion of revenue in fiscal year 2011 to over $37 billion in fiscal 2018 and will likely eclipse $45 billion in fiscal 2019. It now represents ~15% of Apple's total sales and will continue to move higher in the future. 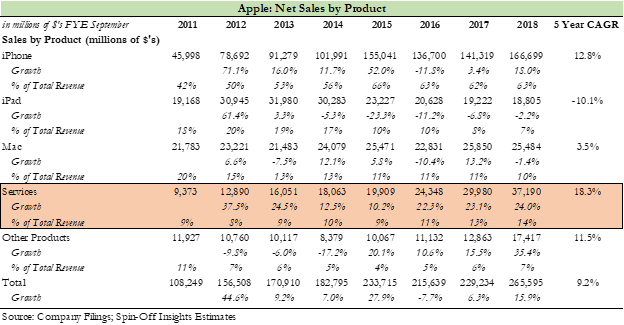 At ~15% of total sales, the Services segment is still a relatively small part of the entire business. However, in Apple's first fiscal-quarter earnings released at the end of January, it began disclosing gross profit for the segment.

This showed that it is a much more profitable business than the Products business (iPhone, Mac, iPad, etc.). The Services business generates gross margins in the low 60% range versus the Products' gross margins in the 30s. This means that it contributes disproportionately to overall company profits relative to its percentage of total revenue. For instance, the Services business contributed over 21% of total gross profits in the first quarter of 2019 and over 33% in the second quarter. 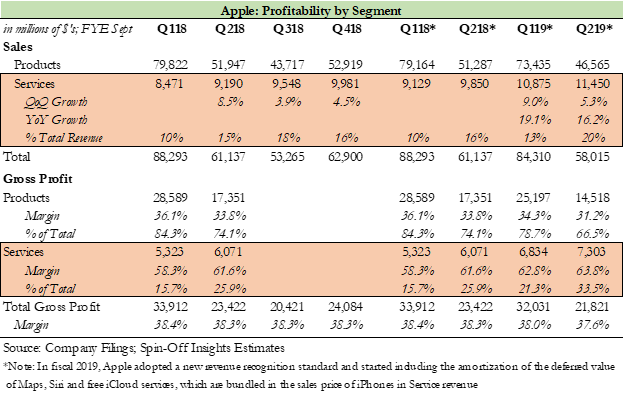 Management set a goal to double the services business from fiscal 2016 to fiscal 2020. This implies over $48 billion of revenue in fiscal 2020 and a ~19% compound annual growth rate from the fiscal 2016 base. Apple is currently on track to exceed this target.

How Big Can the Services Business Get?

Very few businesses that generate $40 billion in revenue can sustain an above-average growth rate. In order to do so, you need a massive end market and a scalable product or service.

On Apple's first-quarter 2019 conference call, it disclosed an important statistic. The active installed base of iPhones is around 900 million (which is actually up almost 75 million over the prior 12 months). Breaking this down, it means that Apple generated about $12 in services revenue per active iPhone in the quarter. Said another way, this is ~$4/month or ~$48 per year on an annualized basis.

Despite the Services business already being large, the amount of revenue generated per active iPhone is still quite small. Furthermore, it is important to remember that the Services business doesn't necessarily generate revenue directly from device owners. Rather, a large percentage of revenue is generated indirectly through the App Store (paid downloads, in-app purchases, and subscriptions), Apple Pay, advertisements, licensing fees, etc.

Besides these indirect sources of revenue, Apple is aggressively creating and improving various services to directly monetize device users. Examples of these services include Apple TV, Apple TV Plus (original programming), Apple News+ (the "Netflix-for-news"), iCloud Storage, and Apple Arcade (coming out this fall - the "Netflix-for-games").

With all these initiatives and growing end markets (app downloads, google searches, Apple Pay transactions, etc.), the roughly $4 in revenue per month per active iPhone looks quite low. It is easy to envision a scenario where that moves well into the double digits.

For instance, Apple keeps about 50% of the subscription revenue from Apple News+. Thus, it can make ~$5 per month per subscriber just off of this single $9.99 monthly subscription. While it doesn't disclose subscriber numbers for the individual services, in the second quarter, Apple said it had over 390 million total paid subscriptions (up 30 million or 10% quarter-over-quarter and 120 million or 44% year-over-year). Its goal is to exceed 500 million subscribers during 2020.

In terms of how large the Services business can become, it is simply a function of the size of the active iPhone installed base (or all Apple devices) and how much revenue it can generate per iPhone (Apple device). This latter factor is impacted by what services Apple introduces and how individuals utilize their device (app downloads, google searches, subscriptions, etc.).

The table below shows what would need to happen for the Services business to generate $100+ billion and $200+ billion in revenue (multiples of where it is today).

While aggressive, the above assumptions don't appear to be outrageous. $10 per month is just an Apple News+ subscription and a few third-party subscriptions combined with the other indirect ways Apple monetizes. $15 per month could be thought of as a power user (utilizes Apple Pay, multiple Apple subscriptions, etc.). Overall, $10 or $15 in Services revenue per month per Active iPhone appears aggressive compared to just the ~$4 in Q1 2019, but not completely unobtainable someday.

A few risks stand out. Some third-party apps, and particularly the larger ones such as Netflix (NASDAQ:NFLX), Spotify (NYSE:SPOT), and Amazon (NASDAQ:AMZN), have stopped allowing new users to subscribe within the iOS app store and instead direct potential subscribers to their website in order to avoid the market place fees (~30% in the first year and 15% thereafter). The decision by Netflix to no longer allow new subscribers to sign up through the store is expected to cost Apple hundreds of millions of dollars in 2019. If more and more third-party apps stop supporting Apple's marketplace as a method of payment, then it will obviously have large consequences.

Another risk to the Services business is the ramifications from potential legislation. In May, the Supreme Court ruled 5-4 which allows iPhone users to pursue their antitrust case against Apple. The plaintiffs claim that Apple has a monopoly over iOS distribution, which allows it to pass along its 30% fee on app sales to consumers. Apple is fiercely defending itself, but any adverse outcome could force it to reduce its commission rate on app sales.

Analysts and investors obsess about quarterly iPhone sales, but the Services business, which has contributed over 26% of Apple's total gross profit so far in 2019, continues to grow rapidly and is becoming more and more important to the company's overall business. Management is aggressively investing in the business and hopes to generate around $48 billion in revenue in 2020 (double from 2016) and exceed 500 million subscribers. Growing it to a $100 billion dollar + business someday does not seem entirely farfetched. It only requires the number of active iPhones to increase to 1 billion from ~900 million in Q1 2019 (up ~75 million over the past 12 months anyway) and monthly Services revenue per active iPhone of only ~$10 (from ~$4 in Q119).

If Apple can execute that type of growth, then it will have a major impact on the consolidated business. It will make the company's performance much more stable and less reliant on the next iPhone introduction or inventing the next hot consumer product. Also, it will have an enormously positive impact on the overall company's margins (Services' gross margins are much higher than the Product segment). This will result in a more durable business long-term and subsequently a higher trading multiple. 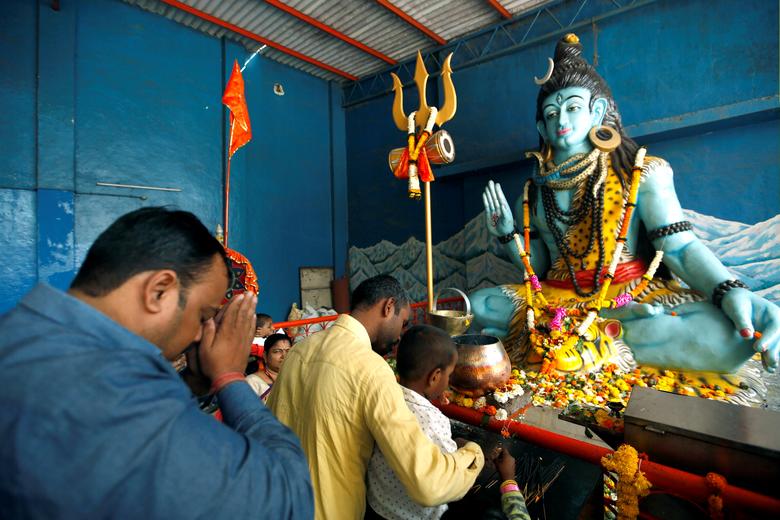 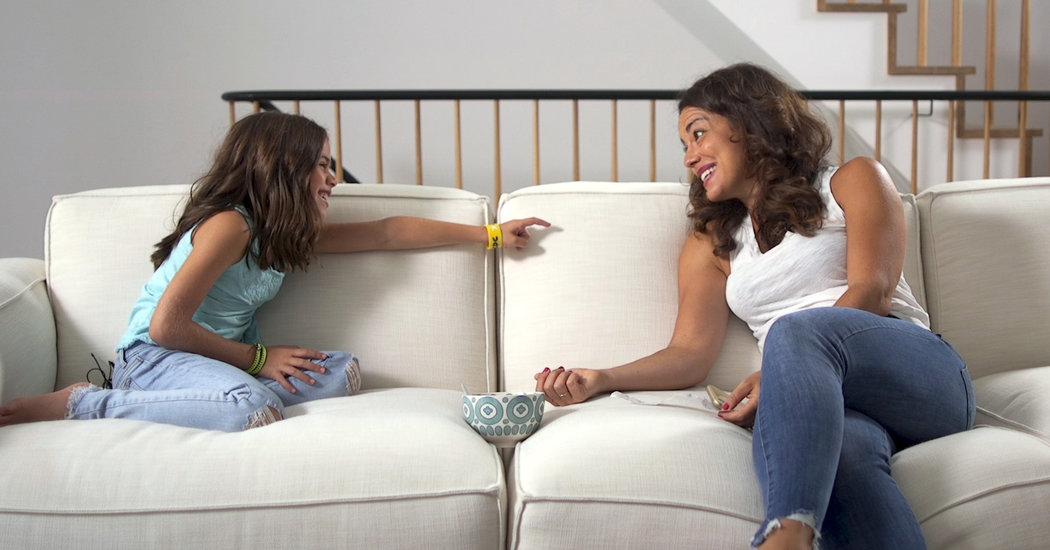 According to your children, ‘sharentin...

Apple Arcade: Everything You Need to Know About the New Video Game Streaming Service