It's time to take a look at one of the smaller industrial companies I have reviewed so far. The American Woodmark Corporation (AMWD) is a Winchester VA based producer of home furnishing products. The company produces furnishing like kitchen counters and has a market cap of slightly more than $1.4 billion. Even though the company does not reveal a lot of information about the housing market, it can be used as a great tool to see how the housing market is doing. And what better time to look at the company than shortly after the release of quarterly earnings?

Good Results, But Not What We Want To See

American Woodmark is a company that is quite easy to understand. The company produces furniture under a few key brands. The company is doing it quite successfully as I am about to show you. The first example is long-term bottom line growth. Since the start of the expansion in 2016 (calendar year), the company has reported only one quarter with negative adjusted EPS growth. This continued in the just released fourth quarter of 2019 fiscal year as adjusted EPS reached $1.87 compared to expectations of $1.88. This is 14% higher compared to the last quarter of the 2018 fiscal year.

Before I go any further, it is important to briefly discuss the current economic situation we are in. American Woodmark is without a doubt highly dependent on the housing market. The company is not a homebuilder but the main 'thing' that drives top line growth is housing sentiment. With that said, leading housing indicators are showing significant weakness since the first half of 2018 when building permits started to slow along with the NAHB housing market index. This index measures single family housing sentiment and has been a good indicator of 'hard data' from the housing market.

And just to prove that these indicators do not lie, 1-unit building permits were down 9.4% in April after showing absolutely no attempts to rally since 2018 as you can see below.

With all of this being said, it makes more sense to say that American Woodmark reported sales growth of a mere 0.4% in its fourth quarter.

Sales totaled $407.4 million which is below expectations of $412.10 million. One year ago, sales came in at $405.89 with a growth rate of 57%. The company's sales are slowing for the first time since the start of the expansion after the company has reported solid growth rates in almost every single quarter. Even after housing sentiment peaked last year.

CEO and Chairman Cory Dunston mentioned a few very important points which is why I am showing you the entire quote below.

We experienced solid growth in the builder channel, and independent dealer and distributor channel, however the home center channel proved to be challenging. Despite the lower growth and market cost headwinds, we continued to gain cost leverage through our integration work and are pleased with our adjusted EBITDA performance. Despite the quarter-to-quarter uncertainty in the market, we remain very confident in the underlying industry fundamentals and our ability to grow in all channels.

First of all, the company mentions slower quarter and quarter-to-quarter uncertainty in the market. This makes perfectly sense given that the indicators I just showed you are indicating that the market is making life more difficult for companies operating in the housing market.

The second point I have to mention is the company's strong margins despite costs headwinds. Thanks to the efficiency measures the company was able to keep operating margins stable. Operating margins came in at 9.5% from 9.4% in the prior-year quarter. Gross margins declined by 60 basis points to 21.4%. Net margins accelerated from 4.7% to 5.4% as net income growth as net income growth came in at 15%. Adding to that, the company continued to buy back shares which pushed the number of shares outstanding down by 4.1% in the fourth quarter.

In all fairness, a lower share count is not something we can take for granted as the company has steadily increased the number of shares outstanding. Nonetheless, the graph below also shows the strong margin expansion that started even before the start of the housing expansion of 2012. Note that the graph below does not include the most recent quarter. 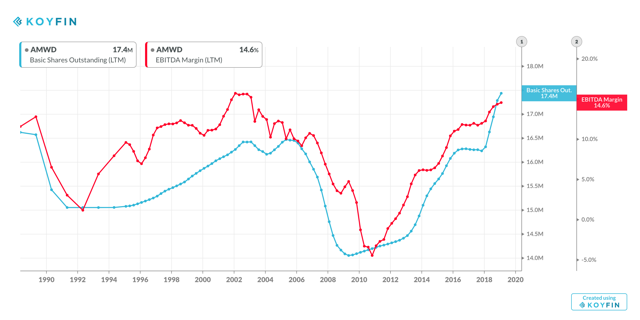 The third and last point the CEO is making in the quote above is the fact that the company remains confident. American Woodmark is in good company as most homebuilders that I have analyzed have either witnessed higher growth in the past few weeks or are generally positive going forward. One example is the homebuilder Toll Brothers (TOL) as I discussed in this article.

Nonetheless, the stock (black line in graph below) is down more than 9% while I am writing this. It seems the stock is sending a signal to other homebuilders as displayed by the homebuilders ETF (ITB) (red line). 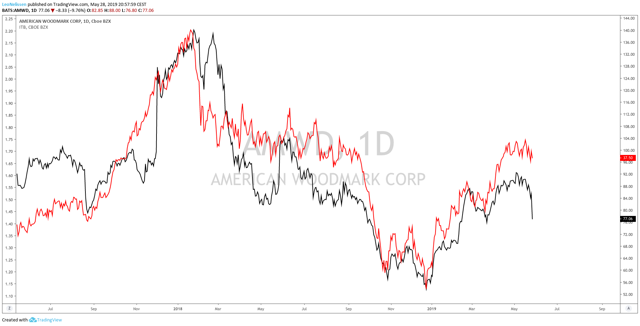 What we are dealing with is a very good company which is simply not able to withstand the pressure from leading indicators anymore. The recent sales miss is a good indicator that the slowing housing market has finally hit the top line of major operators in the housing industry.

The fact that most companies are seeing light at the end of the tunnel is valid given that NAHB housing sentiment has been slowly recovering recently. Nonetheless, the current signs of a recovery can also be just a slow recovery in a bigger downtrend. As vague as that sounds we have to acknowledge that the signs of a housing recovery are weak and most traders are not willing to take additional risks after the most recent homebuilders rally. American Woodmark is probably one of the best examples.

My strategy is to stay on the sidelines. Even though this company is trading at roughly 11x next year's earnings, I think it is best to wait until we see further signs of a housing recovery. If we get these signs, we will still be early enough to get capital gains from this stock. I think it is just too risky to start buying right now even though I really like how the company is supporting its margins and bottom line in this challenging time.

Additional disclosure: This article serves the sole purpose of adding value to the research process. Always take care of your own risk management and asset allocation. 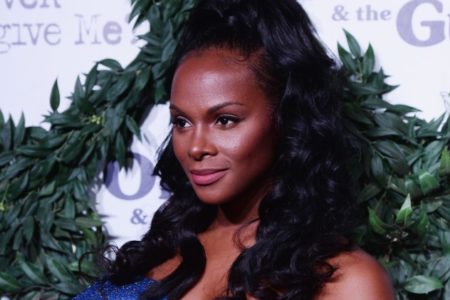 Tika Sumpter Is A Beauty We Can’t Get Enough Of The bra connects to an app that spits out th... 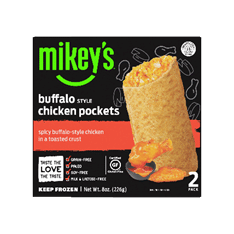 Do business anywhere with this $30 Square reader

If you sell anything, whether it...